700 Men ‘Standing Firm in Our Faith’ at Men’s Conference 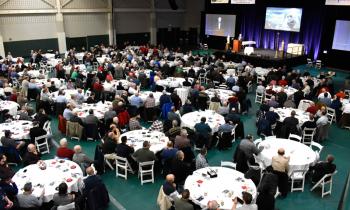 “Standing Firm in Our Faith,” this year’s Diocese of Allentown men’s conference. (Photos by John Simitz)

“We come together as brothers and are reminded that all of us need to stand firm today in faith,” said Bishop of Allentown Alfred Schlert to 700 attendees at the Diocesan Men’s Conference “Standing Firm in Our Faith,” Nov. 23 at DeSales University, Center Valley.

The conference was hosted in Billera Hall for the first time this year, having outgrown its previous location in the University Center.

“We are men in faith, many are fathers and husbands, which is a beautiful vocation that puts heavy responsibilities on you to be the protector, provider and defender of your families,” the Bishop continued. “Let no one take away from you the importance of that.”

Presenters for the Spanish track included Dr. Ricardo Luzondo, co-founder of Renovacion Familiar Ministries; and Deacon Isidro Gonzalez, who serves in diaconal ministry at Our Lady of Mercy, Easton.

“The only way we can stand firm in our faith is by asking ourselves the question ‘Who do you say Jesus is?’” said Ralph Martin. “There are a lot of people who seem to have created Jesus in their own image.”

Martin explained that Jesus cannot be separated from his teaching, and that many people want to have Jesus affirm their lifestyle rather than allowing their lives to be transformed by the Holy Spirit.

“You can’t know the real Jesus unless you listen to his word and are formed by his word,” said Martin.
Martin emphasized that every person is called to holiness and evangelization.

“Your life won’t get going as it should until you make that total surrender to Jesus,” he said. “You don’t drift into the Kingdom of God by going along with what everyone else is doing.”

Martin shared the story of his own reversion experience. Though he was a cradle Catholic, he fell away from the faith during his youth. His return to Christ was sparked by a powerful experience on a Cursillo retreat in college, which he attended at the prompting of a friend.

“If Jesus is the Lord, the only sane response would be total surrender,” said Martin. “There’s only one thing that really has to happen in our lives to make them a success: coming to Jesus, being with him to the end, and letting him come back and take us to the Father’s house.”

Gus Lloyd reinforced Martin’s message, emphasizing the importance of prayer in the lives of the men.

“You have been called by God to be in this time in history,” said Lloyd. “Our faith is under attack on so many levels, and we are called to be men of action. Number one, above all things, is to be a man of prayer.”

Lloyd discussed the seeds of grace that are planted in our lives through the sacraments, and how we are able to plant seeds of grace in the lives of others that may inspire them to turn to Christ later in life.

“God is calling us to sow seeds of grace everywhere we go, indiscriminately,” he said. “We can’t worry about how people are going to react to the truth, and we cannot be cowardly about it.”

Lloyd shared the story of his reversion experience, which led him to Christ after spending years in a lifestyle removed from the faith. He emphasized the presence of God’s grace, even in one of his darkest moments where he nearly lost his daughter, and how God reached him through the circumstances of his daily life.

“God never does something without a plan,” said Lloyd. “Every seed of grace in your life has a purpose.”

Lloyd challenged the men to think of ways they could plant seeds of grace in the lives of others.

“You are being called to lay down your life for the faith,” he continued. “It all starts on our knees, with being a man of prayer. That is where the battle will be truly won.”

Sam Guzman spoke about heroism and how men are called to rise up against evil.

“We look at the world and see so much sin and darkness,” he said. “A man wants to combat evil, to defend our families, to slay the dragon. It’s part of who men are: we see the evil in the world and we want to do something.”

Guzman discussed how heroism is a journey, and drew examples from the life of St. Peter. He explained that St. Peter was an apprentice for three years, and went through many trials during that time, but that it all started with a call.

"Every hero’s journey starts with a call,” he said. “No hero has an adventure at home on his couch watching Netflix – there is always a call to go out into the unknown.”

Citing the moment when St. Peter dropped his net to follow Jesus, Guzman emphasized that the men will be called out of their comfort to be challenged.

“Any time we step out to answer that call, we are eventually transformed. We never come home the same,” he said.
Guzman described chastity, poverty and obedience as weapons that can be used to overcome evil.

“God needs men who can be used for the coming of the Kingdom of Jesus in this world,” he said. “Answer the call, endure the crucible and then carry the cross, because there is good in this world and it’s worth fighting for.

In the final keynote of the day, Father James Greenfield discussed seven common struggles of those striving for holiness, as well as corresponding opportunities to approach life through the lens of faith.

He discussed the struggle to feel God’s presence in everyday life, as well as the challenge of allowing our earthly suffering to orient us toward Christ.

“Let suffering soften our hearts rather than harden our souls,” said Greenfield. “Suffering is part and parcel of life, but do we allow it to help us be our best selves?”

Father Greenfield ended with a call to action, inviting his audience to become men of faith.

“Each moment of life that we live is an opportunity to fall more in love with the God who created us and who wants us to live with him forever,” he said.

The day concluded with Mass celebrated by Father Adam Sedar.

Read about the Men's Conference in Spanish here.

Attendees Striving to Live the Faith

“The number of men who attend this conference is edifying,” reflected Andrew Ivankovits, vice chair of the Commission for Young Adults and parishioner of the Cathedral of St. Catharine of Siena, Allentown. “It’s great to see so many men in our Diocese who want to learn more about the faith, and who are striving to live the faith more and more each day.”

“I have been attending the men’s conference for four years, ever since I first heard about it,” said McGouldrick.

“The inner peace I have experienced at each one has been comparable to attending a retreat. Just as with a retreat, you can never compare one to another. Where each speaker’s passion may be life-enhancing, their personalities, backgrounds and experiences are different, and therefore produce a different result for each and every man from one year to the next.”

“In these challenging times it was awe-inspiring to see 700 men professing their faith,” said Gary Buschta of Holy Trinity, Whitehall. “We need to lead by example to show the world that the Catholic Church is as strong as ever.” 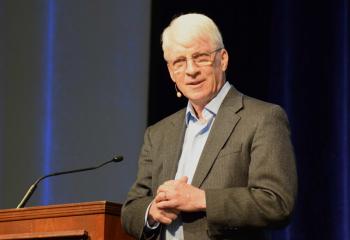 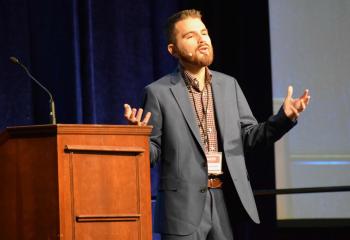 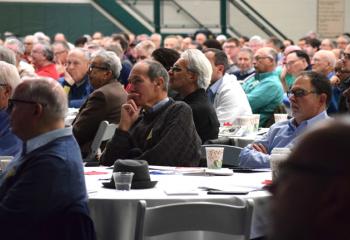 Men listen to the speakers. 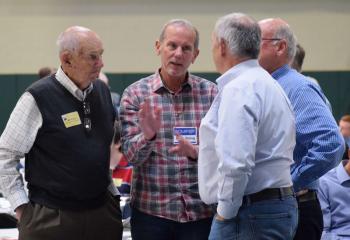 Talking during a break. 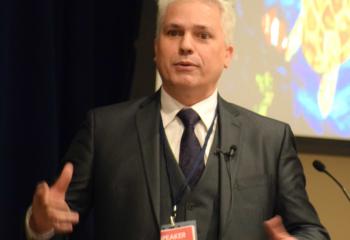 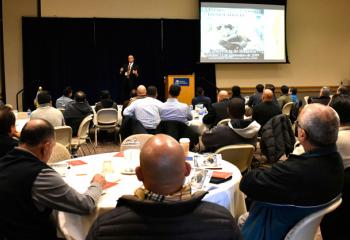 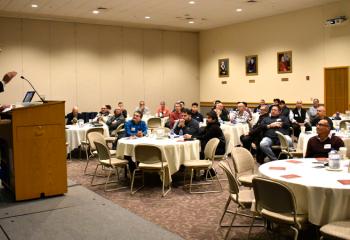 Seminarian Matthew Kuna talks to the Spanish group about vocations. 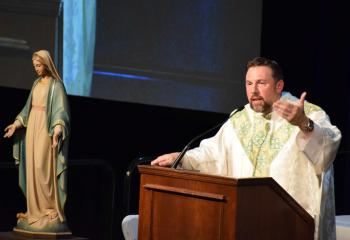 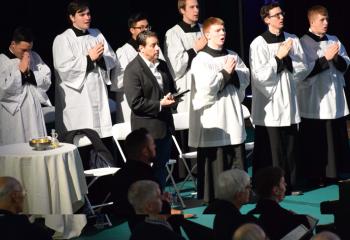